We don’t have cable TV in our home.  The only shows we watch are when we have family movies nights, or very occasional PBS cartoons during lunchtime.

So I was appalled this week when Son I. came home from school with this Time “for Kids” Magazine with Malala Yousafzai on the cover.  In case you are not familiar with her, Malala is a young woman who was shot in the head by the Taliban on the way to school in 2012. 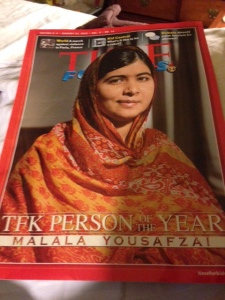 The article talks about how her friends sold her out to the Taliban fighters before they shot her in the head.  According to the article, Malala was voted person of the year over Taylor Swift and Peyton Manning.  I don’t know about you, but I would rather my children vote for a singer or football player and not have any idea about a girl on the other side of the world being shot in the head on the way to school.

Another article in the same magazine talked about the terrorist attacks in France.  It said, “The week before the rallies, gunmen had shot and killed 17 innocent people in three separate attacks.  The victims included eight journalists and three police officers.  The gunmen are believed to have had ties to the terrorist groups of al-Qaeda and the Islamic State of Iraq and Greater Syria.”

Son I. is in third grade.  He is nine years old.  Does he really need to know about al-Qaeda and ISIS? More than that, with Common Core, my children can barely figure out multiplication and division, much less write a cohesive paragraph, but they are spending time on this?!?

I know some of you will just tell us if we don’t like public schools to pull them out.  We already homeschool Daughter P, but due to the nature of Andy’s divorce, we have no choice but to keep our other children in the school where they are.

Secondly, I don’t advocate keeping your child naïve of all the wrongs in the world.  We strongly support missionaries in Ghana and our children understand that there are people all over the world who suffer in various ways and don’t have as much as we do in America.

But do our children need to know about terrorists and school shootings and other adult issues? And then we wonder about why childhood anxiety is on the rise.  Time magazine itself had an article suggesting up to 25% of children have a diagnosable anxiety disorder.  From scary dreams to being unable to sleep to general worry – why are we forcing our children to deal with issues that terrify us as adults?

Let our kids be kids!